Are You a Peacemaker or a Provocateur? 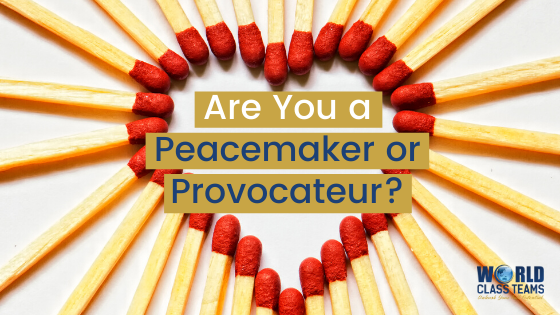 Leadership researchers and thought-leaders, Drs Zenger and Folkman, were curious to know which of these attributes made a leader more effective. They developed an assessment to measure how leaders performed in these two areas.

Peacemakers are highly motivated to resolve conflicts and to ensure that everyone cooperates. They show a high level of concern for others and stay in touch with issues and the concerns of all members of the team. They go out of their way to be inclusive.

Provocateurs challenge others to do everything possible to achieve goals. They become the champions for new projects or programs. They know how to market, persuade, and encourage others. They also possess the courage to make changes that will improve the organisation.

Who is a More Effective Leader?

Zenger and Folkman analysed 360-degree assessment data from over 85,000 leaders. There were a number of interesting findings:

Many leaders gravitate toward one of these approaches or the other. In many ways, some leaders believe that the ideal leader is either a peacemaker or a provocateur. While most people appreciate the inclusiveness and consideration of the peacemaker, they also recognize how the provocateurs can challenge people to do things they would not have done on their own. The best leaders do both approaches well.

Peacemakers and provocateurs stood out on different leadership characteristics.

The key characteristics of the peacemakers were:

The key characteristics of the provocateurs were:

Becoming Ambidextrous – Be a strong peacemaker and a strong provocateur

Most people have a strong preference for using one hand over the other. That is a natural tendency. No doubt people will prefer one of these dimensions more than the other, but leaders who do both well are much more effective. A leader does not need to be equally skilled at both. If one of the skills is above average and the other is below average, then you are destined to be an average leader.

Leaders can lean toward one dimension more than the other, but the effect of doing both well is substantial, as is demonstrated in the graph below. Being above average at both dimensions raises the ratings of overall leadership effectiveness to the 79th percentile, and being in the top quartile on both lifts a leader’s effectiveness to the 91st percentile.

DIANA’s PRO TIP: Figure out which side you are on. Ask your fellow workers, am I a peacemaker or provocateur? An easy way to begin the improvement process is to identify a leader you know that is highly skilled in one of these areas and ask them for some advice. You can take it a step further and ask them to be your coach.