Win Like the All Blacks! How to Turn Around Team Culture 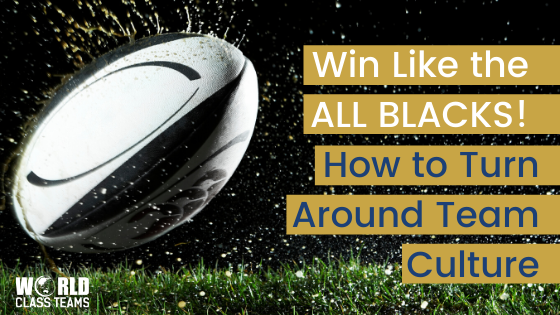 The New Zealand All Blacks were at an all-time low after losing the quarterfinal in the 2007 Rugby World Cup. It was their worst World Cup result EVER and first time New Zealand had failed to make the semi-finals. For a proud rugby-mad country, this was a disaster and national embarrassment.

The team needed to rebuild. They were in desperate need of good leadership and decided to reinvent themselves by creating a new high-performance culture.  Self-reflection by the executive at the time turned into the development of 15 mantras, which have been central to them subsequently dominating the game and being recognised as one of the greatest sporting teams in history.

In his book ‘Legacy’ James Kerr outlines ‘The First XV’ – 15 All Black principles, based on the team being fifteen players who work together towards a common purpose – to win a game of rugby. The principles for how they rebooted and reframed their future as a high-performing team are instructive and can work in the same way for you and your team in business.

Never be too big to do the small things that need to be done.

Before leaving the dressing room at the end of a game, some of the top players in the team stop and tidy up. They literally ‘sweep the sheds’. It is an example of personal humility, a core All Blacks value. The All Blacks believe that it is impossible to achieve success without having your feet planted firmly on the ground.

When you’re on top of your game, change your game.

It is the philosophy and focus of continuous learning and continuous improvement. Even at the pinnacle of success look to do better. Adaptation is not a reaction, but an everyday action, driven proactively.

When Richie McCaw got his first All Blacks shirt, he spent a minute with his head buried in the jersey. Better people make better All Blacks is the core belief, and understanding ‘why’ identifies the purpose of being an All Black. Knowing your ‘why’ is the internal powerful driver that causes you to go the extra mile, for yourself and for your team.

Central to the All Blacks belief is the development of leaders and the nurturing of character off the field, to deliver results on it. This involves a literal and metaphorical handing over of responsibility from management to players so that by game day the team consists of one captain, and 15 leaders. Shared responsibility means shared ownership, high accountability and high trust.

Get up every day and be the best you can be. Never let the music die in you.

Former head coach Graham Henry made pre-match time the team’s time, as part of his devolved leadership plan. He left the players alone as a group to do what they had to do.Mastery, autonomy and purpose are three drivers of All Blacks success, where success is defined as modest improvement, consistently done. For the All Blacks, leaders are learners and mentors.

In Maori, whanau means ‘extended family’ and its symbol is the spearhead. Though a spearhead has three tips, to be effective all of its force must move in one direction. The All Blacks select on character over talent, which means some of New Zealand’s most promising players never pull on the black jersey. If you don’t have the right character, your inclusion would be detrimental to the whanau. No one is bigger than the team. The team always comes first. Connect with one another and strive towards a common goal.

Aim for the highest cloud.

Go Forward! Reframe your challenges into proactive goals. You have to be proactive at all times, taking risks and responsibilities is one of the many skills you learn from rugby. This sounds militaristic, but in its core it is true, rugby, at the end of the day, is a contest of strength, skill and intelligence. Create for yourself a narrative of extreme, even unrealistic ambitions and benchmark yourself to the ultimate.

The foundation for success on a rugby field is built in training. You win games in training. The ugly truth is that in most cases you get the results of your weekly training efforts and commitments in the game at the weekend. Make practice your test, make it intense, it should be central to your culture. Training with intensity accelerates personal growth.

One minute can decide the outcome of a game, as it can the outcome of a business situation. Pressure is expectation, scrutiny and consequence. Under pressure, your thinking can be diverted. Bad decisions are made because of an inability to handle pressure at a pivotal moment. In moments of pressure, the All Blacks use triggers to switch from ‘panicked red’ head to ‘cool blue’ head. Richie McCaw grasps his wrists and stamps his feet, literally grounding himself. Using these triggers, the players aim to achieve clarity and accuracy, so they can perform under pressure.

Honesty drives better performance for the All Blacks: Honesty=Integrity=Authenticity=Resilience=Performance

‘Know thyself’, is a key tenet of the All Black philosophy, believing that the development of the authentic self is essential to performance. High-performance teams promote a culture of honesty, integrity, authenticity. The All Blacks’ socials deliberately hark back to the local rugby culture each player came from, reminding them of why and how they came to be here. No international superstar status, they simply keep it real. Better people make better All Blacks, is an All Black credo.

Find something you would die for and give your life to it.

Focus is vital for the All Blacks – play to win, don’t play not to lose. Don’t be a good All Black, be a great All Black.
Give everything you have – then a little bit more. What do you offer the team? What are you prepared to sacrifice? Champions give the extra, discretionary effort and make the sacrifice it takes to do something extraordinary.

What is the extra that will make your team extraordinary?

12. Invent your Own language

Sing your world into existence.

There is a ‘black book’, which was for a time, for All Blacks eyes only. Its collected wisdom still informs the culture:

It was a system of meanings that everyone understood, a language and vocabulary, a set of beliefs that binds the group together. These have subsequently evolved to Humility, Excellence, Respect as the three words at the core of the All Blacks ethos.

A key factor in the All Blacks success was the development of the new haka, Kapa o Pango. Rituals reflect, remind and reinforce the belief system, they reignite the team’s identity and purpose.
Building a great team requires individuals who enjoy a deep degree of trust in one another, the trust that teammates are not just dedicated but also up to the challenge. The final line of the haka is ‘Au, au, aue bā!’ – It’s our time! It’s our moment!

The All Blacks task is to represent all those who have come before them, and all those who follow. It’s your obligation and responsibility to add to the legacy – to leave the jersey in a better place.

This is your time.

When a player makes the All Blacks, they’re given a small black book. The first page shows a jersey from the 1905 Originals, the first tour. On the next page is another jersey, that of the 1924 Invincibles, and thereafter, pages of other jerseys until the present day, and pages with principles, heroes, values, the ethos, the character of the team. And then the rest of the pages are blank, waiting to be filled. By the player.

Which of these 15 principles resonates most with you? Which one could really impact your team and their performance?