Motivate Your Team: The Sure Fire Way to Unlock Outstanding Performance 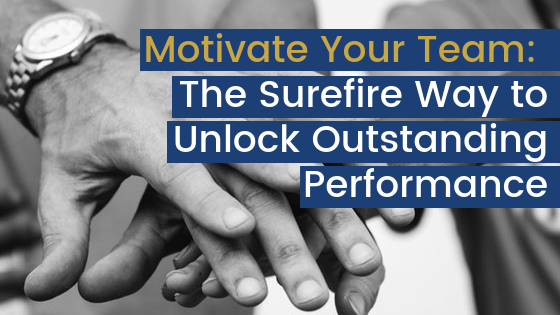 Gallup research reveals that only 13% of employees in Australian businesses are motivated and engaged.  This statistic is no doubt even worse in reality!  People have a tendency to say that they are ‘somewhat engaged’ when they in fact have NO real desire to be at work at all.

Additionally Gallup found that a staggering 70% of an employee’s motivation is influenced by his/her Manager. We expect Managers to be able to motivate their staff, but the truth is most of their staff don’t believe they do this well.

Businesses know how important it is to have motivated, engaged employees.  We find that the problem isn’t the lack of will, rather it is the lack of skill.

Managers know how much time is wasted when people aren’t motivated.  It shows up as:

Leaders and Managers also know what happens when their staff ARE genuinely motivated:

Leaders and Managers know the ‘why’ and the ‘what difference does it make’ of having engaged staff. The frustration I hear from most Managers is ‘I know I need motivated staff but HOW do I actually do it??!’

One had managed to ‘turn around’ an employee who was extremely competent and …… extremely obnoxious.  The Manager had utilised our practical motivation tool. It took 10 minutes to complete and discuss with the team member.  Using the tool told him the right ‘buttons’ to push.  He was so excited by the turnaround in this employee. In fact, he is now considering promoting him rather than ‘managing him out!’

The second call came from a Sales Director.  He was adamant during our workshop on engagement that he knew what motivated each person in his team – ‘It’s money, of course. That’s what motivates every salesperson.’

I asked him to try the tool with his team.  And what a revelation that was.  It turned out that only one of his sales staff selected money as their motivational driver.  The Sales Director had been feeling so frustrated that he couldn’t use financial incentives to motivate his team.  It turned out that he didn’t need to!  He found the real ‘buttons’ to push.  And, sales results have been up for the last three months!

Getting your staff engaged is a sure fire way to unlock outstanding performance.

Are you frustrated that you recognise the benefits of having motivated staff,  but you’re not sure how to motivate your team?   We can help!  Call us on 1300 085 248 to find out how.