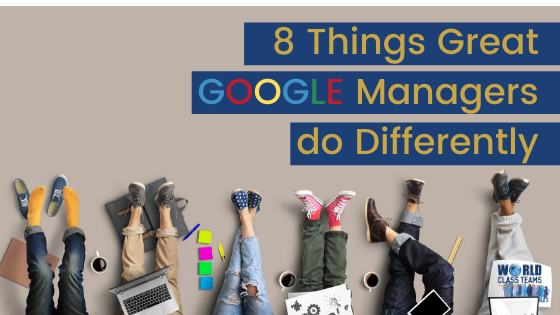 Research shows that WHO your Manager is has a much greater impact on an employee’s performance than ANY other factor.

Google’s HR Director, Lazlo Bock observed ‘Our best managers have teams that perform better, are retained better, are happier – in fact, they do everything better.’ So what if every manager was that good? What is it that makes them that good? And how do you replicate that?

To find out, Google set up Project Oxygen. Researchers gathered more than 10,000 observations about managers, across more than 100 variables. They analysed performance reviews, feedback survey and nominations for top manager awards.

They looked for the patterns and the end result was what might be called the ‘Eight Habits of Highly Effective Google Managers’. Importantly the habits are also ranked, with number one being the most important habit for a great manager.

While you might not be surprised about any of these habits, the question is not so much about whether you would have guessed them but how well you do each of them, consistently and authentically.

Google started coaching its managers in these habits and it paid off. Bock says ‘We were able to have a statistically significant improvement in manager quality for 75% of our worst-performing managers.’

He tells the story of one manager whose employees seemed to despise him. He was driving them too hard. They found him bossy, arrogant, political, secretive. They wanted to quit his team.‘He’s brilliant, but he did everything wrong when it came to leading a team,’ Bock recalls.

Because of that heavy hand, this manager was denied a promotion he wanted and was told that his style was the reason.

But Google gave him one-on-one coaching and six months later, team members were grudgingly acknowledging in surveys that the manager had improved. ‘And a year later, it’s actually quite a bit better,’ Bock says. ‘It’s still not great. He’s nowhere near one of our best managers, but he’s not our worst anymore. And he got promoted.’

People typically leave their jobs for one of three reasons:

The third reason is the one most often cited.

Not only do bad managers negatively impact the performance of their team they also result in higher staff turnover, which significantly impacts your bottom line.  While there is a cost associated with upskilling your managers, the cost of doing nothing is far greater. What are you doing to improve the quality of managers in your business?

Look at the list of Eight Habits of Highly Effective Google Managers and rate yourself on each one. Better still, ask your team to rate you.

Then take deliberate action! Commit to improving the habits that you are weaker in.  If you’d like to enquire about programs to rapidly upskill, get in touch. We’re here to help.