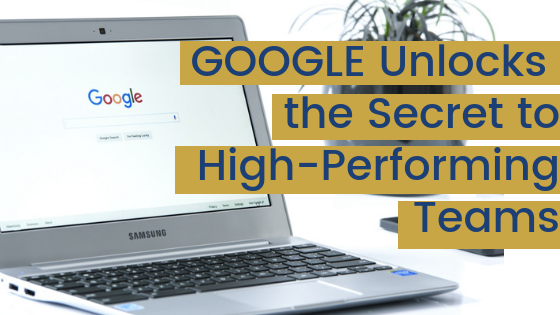 ‘Team’ is the four-letter word du jour, as top companies realise the power of high-performance teams to skyrocket business performance and profits.

So why are teams such a hot topic now?

It turns out it’s been in the works for some time. A study published in Harvard Business Review revealed that “the time spent by employees in collaborative activities has ballooned by 50% or more” over the last two decades.

It’s a power that’s being harnessed in high-performance communities like Silicon Valley, where software engineers are encouraged to work together, in part because groups tend to innovate faster, but also because teams tend to see mistakes more quickly and find better solutions for problems.

The truth is that in today’s highly connected world, if a company wants to outstrip its competitors it needs to influence not only how people work, but even more crucially, how they work together.

Recognising the huge power of teams, Google has become obsessed with how to build the perfect team.

Five years ago they founded Project Aristotle and have spent millions of dollars trying to analyse and understand what makes a high-performance team. They began by studying half a century of academic research looking at how teams worked. They then studied and tracked the members of hundreds of Google teams to try to determine why some teams floundered and others flew.

The Google top executives long believed that building the best team meant combining the best people. They thought that to be great, they had to put their focus on getting the right people on the bus.

The Project Aristotle researchers collected and analysed enormous amounts of data and found, surprisingly, that there was no proof that a mix of specific personality types, or skills, or backgrounds makes any difference to team performance. The “who” part of the equation didn’t seem to matter!

What did emerge was that the successful teams all exhibited two clear behaviours.

The first behaviour of high-performing teams was that members spoke in approximately the same proportion.

There was ‘conversational turn taking’. It wasn’t necessary for people to have equal talk time in every meeting or situation. It was important that by the end of the day everyone had spoken roughly the same amount. ‘‘As long as everyone got a chance to talk, the team did well,’’ Woolley said. ‘‘But if only one person or a small group spoke all the time, the collective intelligence declined.’’

Secondly, the successful teams all had high ‘average social sensitivity’, also referred to as Emotional Intelligence.

This is the jargon meaning they were skilled at intuiting how others felt, based on their tone of voice, their expressions and other nonverbal cues. They noticed, and demonstrated, a sensitivity to the feelings and needs of others. I’ve witnessed first-hand the significant results that ‘conversational turn taking’ and high ‘average social sensitivity’ bring to a team and to a business. Communication is the glue that holds a team together and keeps them focused in the same direction.

Interestingly, not only do these two behaviours impact team and business performance, they also impact positively on an individual’s confidence and sense of value. As a consequence, people become highly engaged – they feel more motivated, are more productive and are more satisfied in their work.  A win for the individual, a win for the team and a win for the business.

Conceptually, communication and social sensitivity are not difficult. It’s the practice, and very consistent practice, that makes them challenging. And as with all things it’s about what you do that is important, not about what you know.

What is clear is that the importance of teams to the success of your business has changed forever. The challenge is to find out how you can unleash the power of teams without having to spend 5 years and millions of dollars like Google.

If you want to discover more about creating high performance teams, you might like to order a FREE copy of my new book “Unleash Your Team’s Potential”. CLICK HERE to order.