The Hidden Value of Observations, as Well as Metrics 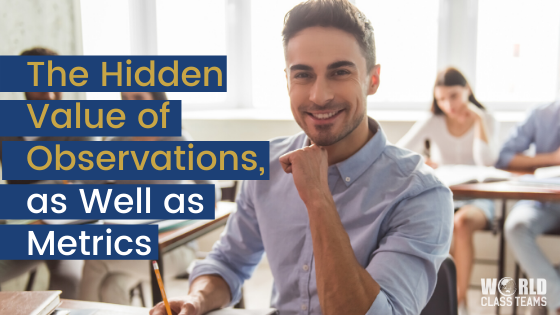 We need to value our observations as much as the metrics on the dashboard. As the Banking Royal Commission highlighted so intensely, it is not just the results, the ‘what’, that matters. It is also the ‘how’, how you gain the results. The ‘how’ has a very big impact on how well you are regarded by your clients.

It is interesting isn’t it, that we have been so conditioned to believe that only numbers are valid proof of change. Yet there is evidence of the change occurring, which is often more powerful than the numbers.

It sits in the specific examples of changes we observe, it sits in the impact of these changes on relationships, on business results, on individual performance.

Let me give you three examples:

A salesperson came into our Greenline program and after the first activity said ‘Oh I so needed to have done this program yesterday. I was working with a difficult client. We had done something incorrectly, he swore at me and said that we should just take our gear and get out. He was finished with us and would get someone decent to do the job.’

The salesperson was very concerned about this, as they were a very large client. He could see after this first activity some different strategies he could have used to diffuse and resolve the situation. We talked about it not being too late, that he could still try the strategies the next morning.

He was courageous enough to do this and when I spoke with him the following week he was very excited to tell me that the client was in fact still a client and that, actually, they were discussing additional business for 2020.

After completing a program on improving Emotional Intelligence, an operational manager was working hard to manage his emotions better. He tended to ‘lose it’ when he felt frustrated with people and would swear and/or walk out.

We gave him three steps to follow. These were designed to help him plan better, to give options rather than make demands, and a ‘trick’ to manage his emotions more appropriately.

Spontaneously, after only one week, his manager said that he could see a difference in this man’s behaviour, in the way he was responding and communicating with his team.

At a workshop on Productivity last week we finished with drinks and networking and two of the more senior people in the group were excited to tell me that they had gained some great tips. In fact, one of the people told me she just couldn’t wait to go into work tomorrow and to apply two of the techniques.

When I called her three weeks later she articulated how well the techniques were working, how much more she was achieving, and how this made her feel so much more satisfied when she left work each day.

These three examples don’t have a specific number attached to them, however there is no doubt in the people’s minds nor in their colleague’s or manager’s minds that change has occurred. And that this change is beneficial to not only that person but also to their colleagues, customers and the business as a whole.

PRO TIP: Take time to look at the evidence, at both the quantitative and the qualitative evidence. Together, they will give you a comprehensive picture of the level of performance in your business, and the level of satisfaction of your customers.