Why Employees Quit: The Unexpected Truth 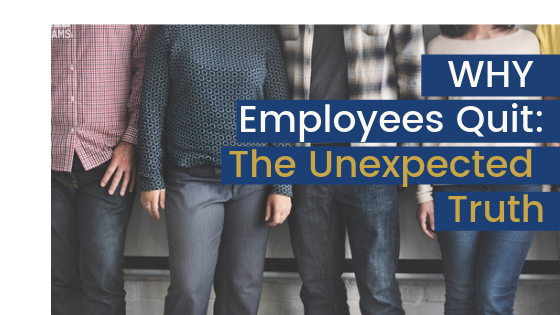 The biggest reason people give for leaving a company is their boss. The uncomfortable truth is that people don’t leave their jobs, they leave their bosses!

On the flip side, it is also true that people will stay with a fantastic manager, even if the work is ‘just okay’ or their commute to work is ‘horrendous’.

Google’s Project Oxygen uncovered the ‘8 Habits of Highly Effective Google Managers’, which I wrote about last week. The same project also identified 3 significant pitfalls for managers. Falling into these habits will almost certainly mean that your team will NOT regard you as a great boss.  Some of them will probably leave and those that do will, unfortunately, be exactly the people you don’t want to lose!

The 3 pitfalls uncovered by Google you need to AVOID are:

1. Having Difficulty Connecting with Your Team

This sometimes occurs when a person is promoted from being a team member to being the Team Leader or manager.

This transition can be difficult for a number of reasons. Sometimes the other team members struggle with the notion that ‘one of them’ is now ‘managing them’. This can show up as resistance to take direction or advice, or as muttering or complaining ‘he/she thinks he’s/she’s above us now’.

It can also be difficult for the person being promoted to get used to the idea that they now need to have the overview and to motivate others rather than to be an excellent operator themselves. Finding the right balance between managing and operating is challenging for many managers, especially those who pride themselves on ‘getting stuck in’ or ‘being task-driven’.

If you are appointed directly into a management role in a company this can also be challenging. You must gain the trust of your team, have enough knowledge or expertise to be credible while at the same time not assume that you are so experienced that you don’t need to learn anything.

When managers show a lack of consistency in their approach to performance reviews/performance management and career development they lose the respect and trust of their team.

Most people can handle bad news, but they won’t accept what they believe is unfairness. Hence it is critical to have genuine clarity around the criteria for performance reviews. Using these criteria mean that people are assessed against standards and not merely compared with other people. Whenever people are compared to others you will get questions and comments about favouritism and unfair treatment.

Staff must know what specific standards they are being assessed on, prior to the performance review cycle taking place. As their manager, you must be well-prepared with your assessment and have examples you have observed to support your assessment. This enables a constructive conversation to occur rather than an uncomfortable disagreement with blame, excuses and no resolution.

There is no such thing as ‘agreeing to disagree’ with regards to performance. Unresolved performance issues result in disengagement and resentment and very often, a decrease in commitment from the entire team.

Spending too little time communicating does not mean you should just keep talking for the sake of it!

It does mean that in today’s workplace staff expect two key communication skills from their manager:

Simply giving instructions or making demands worked, in fact was expected, 20 years ago.

Now people expect to know why they are being asked and how this task or change will be of benefit before they will commit to completing it.

You can choose to mutter ‘Gen Y’ and ‘back in my day’ or you can choose to respond to today’s world and get the outcome you want by adjusting your management style! Interestingly I often hear Baby Boomer managers complain about Gen Y, muttering about how Gen Y should ‘just get on with it as we did’ …… Gen Y are the children of the Baby Boomers. I wonder what that says about parenting as well as managing?!

Staff expect their manager to both speak and listen.

Staff expect their manager to listen actively and openly.

Answering emails or continuing to type while you are listening is not listening actively. Interrupting staff or responding immediately with ‘no, we’ve tried that before’ or ‘sorry, but that won’t work’ will not lead your staff to describe you as a good listener let alone a great boss. Many managers need to learn to ask more questions and make fewer statements, to listen with a ‘researcher’s hat’ on rather than with a ‘judge’s hat’ on.

Managers of course, want to be great managers. Each of us does have talents, strengths, and weaknesses. As a manager, you must acknowledge your weaknesses, particularly if they include one or more of these 3 key pitfalls.

After acknowledging the weakness you must then take action to develop in this area. The action may be as ‘simple yet difficult’ as committing to specific actions you ‘already know about’. It may be to engage a results-driven coach or mentor, a person you believe has the skills and who you respect to help you to improve the skill. For sure, with no action, there will be no change in the assessment your team makes of you as a manager.

With action, you will bring out the best in your people and have them describe you as an inspiring and awesome boss!